I made myself a birthday cake today (it's a bit rough when you have to make your own cake!) Inspired by my friend Susan who regularly has peanut butter and banana on toast, I decided to make a banana peanut butter cake. I used a basic banana cake recipe and put a little less banana and added some peanut butter.

I iced my cake with chocolate peanut butter ganache. I put some cream on the stove with chocolate, butter and peanut butter. Once the cream was almost bubbling, I removed it from the heat and whisked until everything was combined. I didn't quite have enough (I ran out of cream), so I added a bit of icing sugar to bulk it up.

Email ThisBlogThis!Share to TwitterShare to FacebookShare to Pinterest
Labels: Chocolate, Cupcakes and Cakes

My idea of the perfect dinner 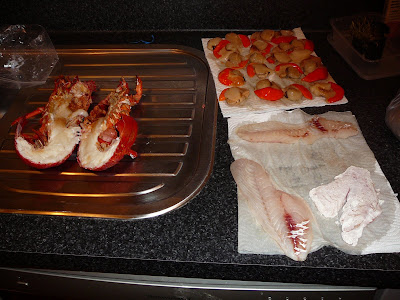 Yup, this is it, my idea of the perfect dinner. Seafood. All from beautiful Northland, and all gathered and caught by my family. 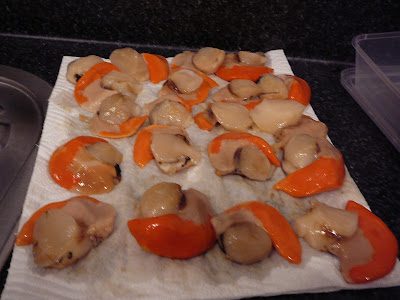 The scallops were so big and tasty. Although I didn't dive for them, I did help shuck them! I cooked them very simply in butter and garlic.

We also had some fresh snapper which we dusted in flour and again, cooked in butter. 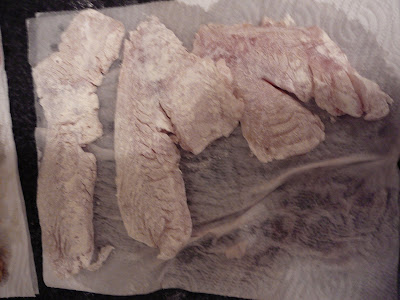 Lastly, we had a beautiful crayfish, thanks to my brother. I boiled it for five minutes, cut it in half and then finished it off in a griddle pan. Again with butter and garlic. Delicious! 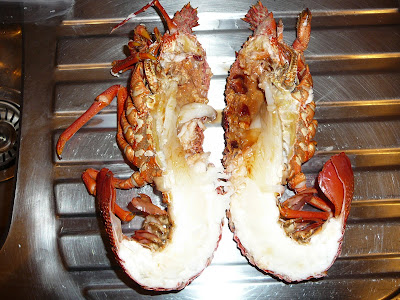 I love to keep seafood very simple, especially when it is this fresh and such good quality. To top off this extra-special meal, my friend headed down to the fish and chip shop and came back with half a dozen fresh bluff oysters. Heaven on a plate!!
Posted by Carina at 20:57 No comments:

Cooking with my crockpot

I'm not a fan of winter, it's fair to say. However, winter does have one positive point as far as I'm concerned - winter food! Winter means I can dig out my crockpot and crank it up. I use my crockpot several times a week. I find it easy, convenient and the resulting dinner is so, so tasty.

I have a really basic crockpot (not unlike the one below). It has two settings, high and low. I purchased a timer for about $6 from a hardware store (Mitre 10 or Bunnings I think), so I can control when it switches on and off. I used to turn it on before work, but was finding that sometimes the meals dried out as they were on for almost 10 hours. I set the timer to switch my crockpot on around 10-11am and off again at 6 (depending on what I am cooking). 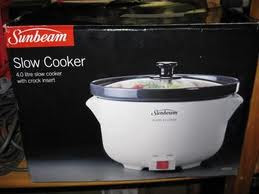 As I mentioned in an earlier post I often use my crockpot for cooking stock. But, it has so many other uses. Curries, casseroles, stews, and more.

When I am cooking meat in my crockpot, I only use the very cheapest of cuts. It's a waste to use more expensive cuts of meat in a crockpot, as you are not doing them justice. A crockpot is slow, gentle cooking. I prefer chuck and stewing steak, shin, shanks and lamb neck. I have also had success with chicken thighs and legs.

Now, I must admit, I am a little bit of a freak when it comes to being orgainsed. As well as frozen chickpeas, I also keep ready-to-go crockpot meat in my freezer. I find that meat tends to only come in giant packs. So, I get it home, chop it into bite-sized pieces and put enough for a meal in a snap-lock bag and toss it in the freezer. The night before, I then take the pre-chopped meat out of the freezer, put it in the crockpot with whatever else I'm using, set the timer and it's ready to go. I don't have time to be fussing about with it before work.

You may be wondering, what about browning the meat? Well, I don't. I don't find it adds anything, and it's also annoying. It creates a mess and for little gain. Jamie Oliver agrees with me. He did an experiment with browned and un-browned meat, and decided he actually liked the un-browned better.

Some of my favourite crockpot meals are beef stews with red wine, vege (onion, carrot, kumara, potato, pumpkin - I use whatever I have), beef stock, chilli and loads of salt and pepper. You can also add soy sauce, garlic, tinned tomato and various herbs and spices you might like. The great thing about a beef stew is there are no hard and fast rules. You just have to make sure you have enough liquid (at least a couple of cups), and some depth of flavour.

The same goes for lamb. Lamb, rosemary and apricots are all good friends and I made a tasty Moroccan-inspired stew the other day with lamb neck. Lamb, garlic, red wine and orange is also a tasty combination.

If you are using meat on a bone (shin, neck, tail, shanks etc), don't worry about the bones, just put the whole lot in the croackpot, by the time it has finished cooking the bones will be clean and you just have to fish them out before you serve. They add so much flavour.

There are so many things you can do with a crockpot, I would recommend getting it out of the cupboard and experimenting. It's hard to go wrong, just make sure you have enough liquid (if in doubt use more rather than less) and make sure you cook it for at least six hours. Any less and your meat will still be tough and not meltingly tender like it should be. Enjoy!
Posted by Carina at 20:27 No comments:

Email ThisBlogThis!Share to TwitterShare to FacebookShare to Pinterest
Labels: Savoury

I did some more experimenting this afternoon. My workmate made the most delicious bannoffee pie on Friday, and it got me thinking whether the same could be done with all my excess apples. I decided to give it a go.

I made caramel using sweetened condensed milk, butter and brown sugar. I blind baked store-bought sweet shortcrust pastry in my flan tin. (I rarely make my own pastry, it is one of the few things I prefer to buy ready-made. I find that the time and effort to make my own far exceeds the convenience of having ready-to-go pastry in my freezer).

I sliced up my apples and mixed them with sugar and flour. I spread the slightly cooled caramel on the pre-cooked pastry and then spread the apple on top. I baked it in the oven for about half an hour.

The end result was a sticky, sweet, delicious pie-like dish. I was so pleased. We had a slice for dessert, however I could only eat a small sliver, as it's very sweet. I think I would like to try it again and put the apple under the caramel, to see what happens. 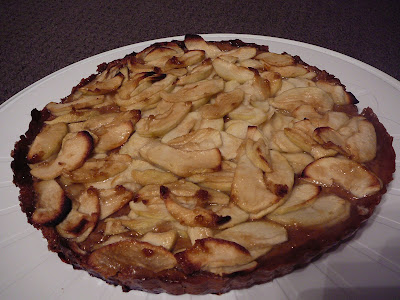 Email ThisBlogThis!Share to TwitterShare to FacebookShare to Pinterest
Labels: Desserts 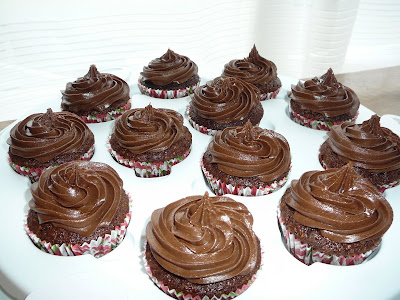 A few weeks ago, I had a few bananas to use up. A workmate had recommended I check out her favourite food blog and on it I found a recipe I thought I might try. It's such a beautiful blog, with wonderful photos.

Anyway, I found some gluten free cupcakes on her website and decided to give them a go. As ever, I didn't follow the recipe exactly, but you can find it here.

I had three bananas, which was more than the recipe called for, but I wanted to use them up. I used regular flour, brown sugar, omitted the rice flour and used 100g of almond meal.

The result was delicious. A lovely almost fudgy cupcake. I sent them to work with my other half and had interesting and very exciting feedback. Some could not taste the banana, which surprised me. Nevertheless, they said they really liked them. One workmate even said he would happily pay for them. Now, that is awesome feedback!

I iced them with chocolate icing, and added a touch of edible glitter to pretty them up. 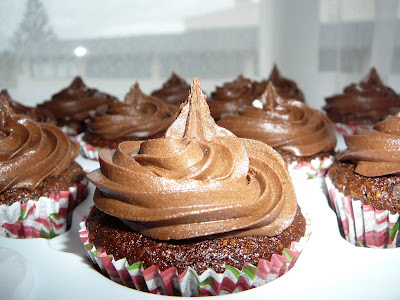 Email ThisBlogThis!Share to TwitterShare to FacebookShare to Pinterest
Labels: Chocolate, Cupcakes and Cakes 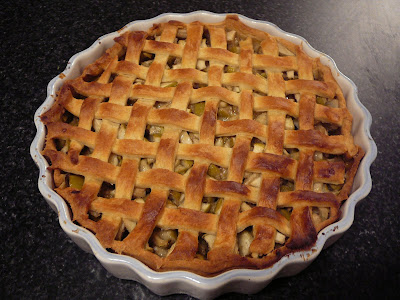 I stayed with a friend last weekend and as we were wandering around her yard, I noticed two wonderful apples trees groaning with apples leaning from the yard next door into hers. Her two excitable dogs were having a great time eating them and chasing them around the yard, but I saw an opportunity.

We loaded up a bag with as many apples as we could reach, leaping up to grab branches to pull the apples closer (she is about as tall as me, so we only scratched the bottom!) One of the trees had green apples and the other red apples. They really were wonderful trees; beautiful big fruit with a bright shine and a gorgeous colour.

I got them home and cooked up a yummy apple pie. I can't take credit for the wonderful lattice decoration on the top of the pie (thanks Rodney!), but I did make the pastry and filling. It's so simple. Make some basic pastry, chop up your apples (peeled or unpeeled) and toss the apple with some sugar and melted butter and whatever spices you like. I used ground cinnamon and cloves. I love cloves with apple. Not much of either, just enough to have a slight hint. Cook it until golden. Sometimes I add custard powder to the apples, this gives a lovely thick consistency. I brushed the pastry with milk before cooking to give it a lovely shine.

I also stewed up some of the apples and they turned into the most wonderful jammy consistency, I was so pleased. As I have a giant bag full, I am going to have lots of fun making all sorts of wonderful apple recipes. I had an idea the other day for a apple pie made with a layer of caramel, I might give that a go tomorrow (also gives me an excuse to buy a flan dish). 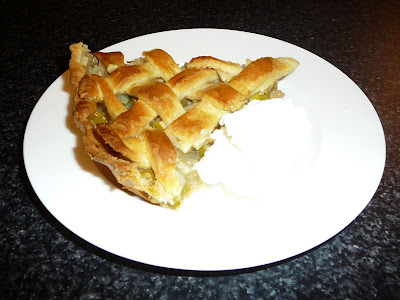