The day I butchered a deer

Yes, that's right, a deer. As in Bambi. I butchered one. In my kitchen. The kitchen in my apartment. Why? How? What?? All fair questions. Let me explain.

On Thursday morning my little brother rang me. He would be coming through Wellington at lunchtime, and had a deer for me. Could I meet him to pick it up? Vension! Yum! I'll be there.

I arrived to find, not the venison I had been imagining, but a deer. A whole deer. Fur and all. Hmmm, interesting. My brother had a grin as wide as his face, he was so stoked to have bagged himself a deer. I'm not sure he had really thought about what I was going to do with a whole deer, he was just so proud of himself. And I'm proud of him too, and very, very thankful for free venison, but I still had a whole deer.

So, we drove the deer back to my place, which I need to point out is an apartment on the first and second story. No backyard. No grass. We do have a deck, but it's a shared deck, with another apartment. So, we left the deer on my varnished wooden floor and I went back to work to ponder what I was going to do with it. Luckily it's winter and my apartment is cold. I'm not sure what I would have done had it been summer.

Never one to shy away from a challenge, I arrived home after work that evening with a plan. I have butchered a sheep before, surely a deer can't be that different? I talked to my Dad who had some good tips, and off we went to Mitre 10 to get a saw. Here, I must give a shout out to Mitre 10 in Petone, those guys and girls are so cool. The staff are always so helpful, and Thursday evening was no exception. The man in the saws department didn't bat an eyelid when I said I needed a saw to cut up a deer. He just recommended one and off I went. Next I needed some plastic to put down on my kitchen floor. Feeling very Dexter-like, I went out to the trade section to find some plastic. The guy behind the counter wanted to know how much plastic I needed, when I said only two metres, he just lopped me off some Mitre 10-branded orange plastic and sent me on my way, free of charge. What a great guy. Off home I went to tackle my deer.

Here is my deer, in the kitchen, on the Mitre 10 plastic, all ready to go! (My brother had chopped off the hind legs earlier in the day, to make it easier to carry and work with). 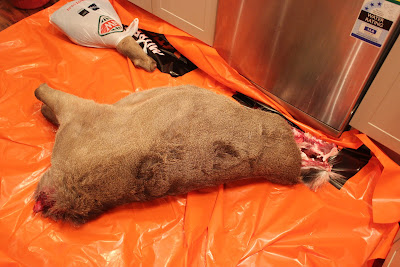 Paul stood the deer upright, and off I went. Turns out skinning a deer is a bit like skinning a sheep, so it wasn't too hard. The only problem was the deer's hair! It went everywhere. Good thing we had the plastic! No photos, as it was a two person job. But, this is what it looked like after I had finished. 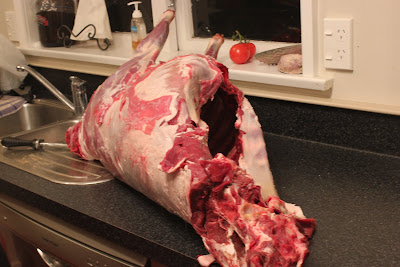 Right about now the reinforcements arrived. Paul rang his brother-in-law, who, like me, grew up on a farm and has butchered the odd sheep or two. He also bought with him his super-duper sharp knives. Excellent. So, we set to work taking it apart piece by piece.

We concentrated on the good bits first (and the bits that I knew) - back steaks, rump, shoulder and fillets. Then we attacked the rest. We didn't leave a scrap of meat on that carcass - I'm a big believer in using everything. 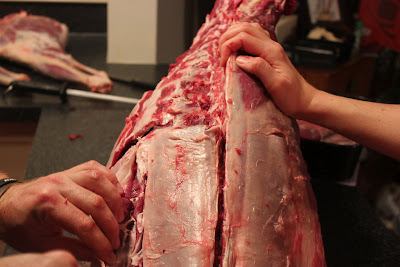 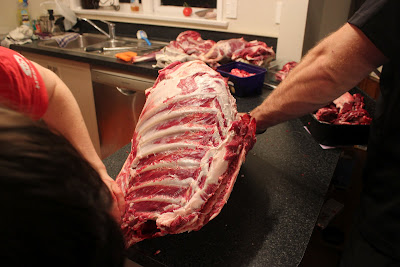 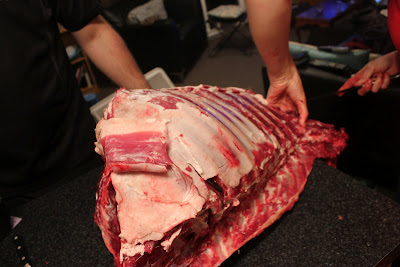 Two and a half hours later, we had finished! What a great feeling. Again, I forgot to take a photo of the carcass, as we were just so pleased to be done! I also forgot to take a photo of all the meat bagged up, it was a massive pile! But, I did get this photo showing about 1/3 of the bagged meat, and all the "mystery meat" - the bits and pieces such as the flaps and the neck meat. Once I had cleaned up all the mystery meat I had 2kg of beautiful stewing meat. Delicious. I have some simmering away now, what out for a post in the coming days. 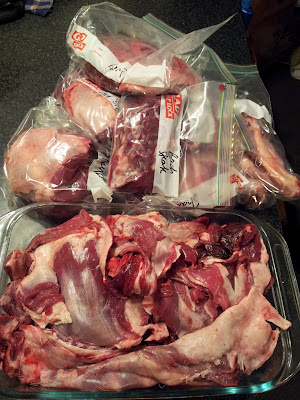 You might be wondering why I didn't butcher it into chops, or use the ribs. Basically, it was too much of a hassle. We only had a tiny kitchen bench to work on and a $5 saw. Every time we had to saw through a bone I had a heart attack imagining how I was going to explain to the landlord why there was a massive gouge out of the bench! Thankfully the only mishap we had was me getting my finger in the way of a knife, and that was right at the end. We did bone out the rump and one shoulder, they will be beautiful.

I had a great time, and Paul and I must give a massive thanks to Rodney who did a sterling job!