I discovered today that 2013 is the United Nations International Year of Quinoa. I am amused that the UN has declared this, but there you go.

Anyway, Quinoa is amazing. However, not everyone knows what quinoa is, let alone how delicious it is. I need to fix that, everyone should be able to share in this deliciousness! As an added bonus quinoa is also ridiculously good for you! It's packed full of important nutrients (fiber, iron, calcium and protein) and gluten free. In my opinion, it can do no wrong!

You can buy it from the supermarket, or the bulk bins at Bin Inn and Common Sense Organics in Wellington also sells it. In the supermarket I usually find it either in the gluten free section, or the organic/'other' section. I think the supermarkets are still trying to find a real home for it.

Quinoa looks a bit like couscous, but the grains are a bit smaller, and a bit more uniformally round. It comes brown, red or black. Brown is much more common, and usually the cheapest I have found. 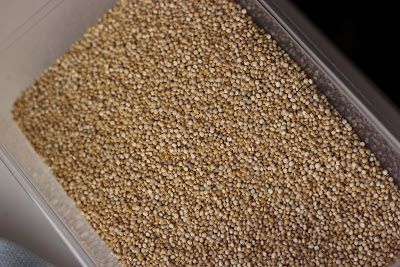 It is super easy to cook. You simply put two parts liquid (water or stock) to one part quinoa, bring it to the boil and then simmer. Done. As simple as that! I usually allow a 1/4 cup per person of dried qunioa. However I always cook more as it is perfect for lunch the next day.

Adding stock gives the quinoa flavour - like couscous, quinoa has very little flavour on its own, it's up to you to pack it full of tastiness.

This is a mixture of cooked red, black and brown quinoa. 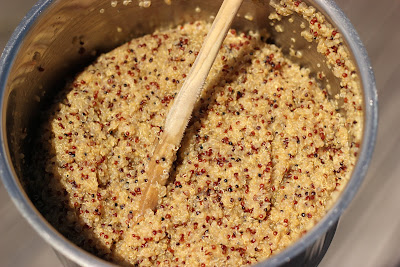 With this lot I made a scrumptious salad for dinner the other night. I cooked the qunioa in chicken stock and then while it was still warm I added a whole bunch of chopped vege and herbs - fresh sweetcorn, beans, celery, capsicum, mint and parsley. I dressed my salad with lemon juice, red wine vinegar and olive oil. Simple and delicious. 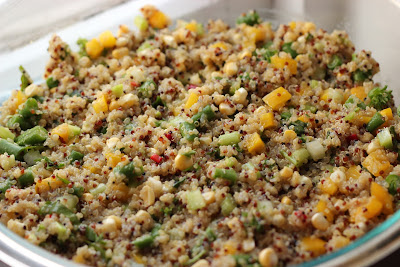 I served it still slightly warm, but it was still delicious for lunch two days later.

I seriously recommend you try quinoa. You won't regret it. My workmate just gave me a book of 365 days of qunioa, so I hope to be able to share more quinoa ideas with you shortly.