Too easy and so delicious

I just have to share my newest creation. I had an amazing smoothie/juice the other day at Reka in the Dowse. I forget what was in it, other then cranberries and mint. Anyway, I decided that I would have a go at creating my own delicious smoothie.

I hauled my blender out of it's hiding place in the back of my cupboard and got creating. I had some mixed berries in the freezer, so in went a good cup full of frozen berries. Next, a good slug of orange juice (I imagine you could use any type of juice you liked - pineapple would be super tasty). I went and raided my mint plant and added two good sprigs of mint (maybe 6-8 big leaves) as well as half a lemon (just the flesh, not the skin).

After a thorough blend, I was left with a wonderful, cold, delicious smoothie. Not too sweet, and with a refreshing kick from the mint. 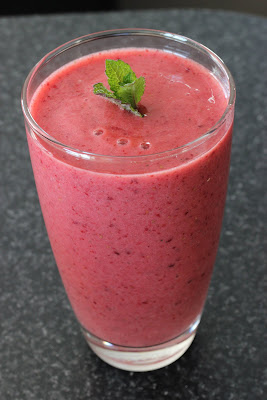 I like my smoothies much thicker than Paul, this is easily fixed. I made the smoothie to the thickness I like, then added extra juice to Paul's to thin it out. Done! Usually smoothies are full of dairy (yoghurt and/or milk) and banana, but this is a great alternative for those who can't/won't eat much dairy, and don't like banana.

You could totally use any mixture of berries, juice and other fruit. Ice cubes would make it cold and add thickness if you didn't have frozen fruit.

And the best news of all - it's super healthy! Bonus!
Posted by Carina at 17:56 No comments:

Wellington on a Plate - Gusto

Part two of Wellington on a Plate saw us head off to Gusto Bistro in Petone.

Gusto's blurb advises us, "Inspired by the ingredients, techniques and wines of the Mediterranean region, Gusto Bistro's menu is littered with classic dishes and some more contemporary interpretations".

The Wellington on a Plate menu was as follows:

Seven of us were dining at Gusto, on a Tuesday night. Gusto is full of nooks and smaller rooms and we were fortunate to be in our own little room - quite nice for a larger group, we could be as raucous as we liked. We all decided on the Wellington on a Plate menu. I went for the salmon gravlax, fish, then the chocolate mousse.

Our first wine match was served up - a delicious chardonnay with the salmon, and interestingly, a sherry with the onion soup.

While we waited for our starters, we were delivered a morsel of smoked snapper wrapped in courgette. Although tiny (the size of my little finger) it packed a punch of flavour and deliciousness. Yum. It left me wanting more.

Unfortunately, we were left wanting and waiting. After 40 minutes of waiting, we had all almost polished off our wine and out starters were finally served. I actually think I am being generous with the 40 minute wait, Paul reckons it was closer to an hour of waiting. Anyway, it was a long time, and we were hungry by the time our starters finally arrived.

Our starters were nice. However, I really can't see how they took so long to arrive, nothing required any cooking as such. And on top of all that, Paul's soup was warm, not hot. My dish was a cold dish (salmon with some foam and a smear of the smoked yoghurt, which really was delicious), so I'm not sure how the soup could possibly not have been piping hot. We had managed to save a mouthful of wine, and we agreed that the wine match was lovely, really well done.

Another wait for the main ensued, but thankfully this was not as long as the starter wait. My fish was beautifully cooked and the puree was tasty. Although, here I have another gripe. Almost all of us ordered the fish, and the size of each portion of fish varied massively. Size might vary between tables, and if you don't know it's happening you can't get grumpy about it, that's fine. But, when one person gets a piece of fish almost three times the size of another and they are sitting next to each other, well, you're going to notice. The same thing happened with our wine, massively inconsistent pours. Now, I know this is picky and a bit miserable of me, but when you are all paying the same, you expect consistency, or close to it. If it was close enough I wouldn't have noticed, and wouldn't be moaning about it. But, the difference was enough for us all to notice, and more importantly, to comment about it.

Dessert was the highlight of the meal. We all chose the chocolate mousse, and it was an excellent choice. All the components of the dish were incredible. The mousse was chocolatey and rich, the sorbet was the right mix of sweet and tart, and the jelly, jam and powder rounded it off beautifully. The wine match with the dessert was also a winner. Again, it was another sherry, but this one was totally different to the first. It was like drinking raisins. Sweet, sticky, moreish, we savoured every mouthful.

While dessert was amazing, I'm not hanging out to return to Gusto. I think overall I would rate it perhaps a 6, helped mostly by the faultless dessert. I think my overall impression was that Gusto takes itself a bit seriously, and perhaps tries a bit hard. It let itself down with extremely slow service, almost-cold soup, and uneven portions.

Wellington on a Plate - Caucus

It's Wellington on a Plate time again, and I am in foodie heaven. Like last year, this year I am using WOAP as a fantastic excuse to try as many new places to eat as possible. Restaurants put on special menus and deals, and it's a great opportunity to step out of the tried and true comfort zone of my favourite places to eat, and to also try places where I would normally steer clear of due to the price.

On Thursday we went along at the invitation of a friend to Caucus restaurant in the Novotel Hotel on the Terrace. Like many restaurants participating in WOAP, Caucus has a set menu plus glass of wine deal.

Paul and I arrived early, so we had a drink while waiting for our friend to arrive. Pleasantly, while we were sitting with our drinks, the staff served us a small bowl of nacho chips. This was just what we felt like - a little something to nibble on to stave those after-work cravings. Good stuff.

The three of us dining all chose the same from the set menu. Gnocchi plus the wagyu beef. It was a shame that we didn't get to see the pork, but not to worry. While we were waiting for our entrees to arrive, we were each served a bread roll and butter; another nice touch.

The gnocchi was interesting. It was fried, which I have not had before. I thought it was quite tasty. It was served surrounding a bit of tomato sauce and a salad. We all felt we needed more sauce. I wanted way more sauce actually. I felt I needed to carefully ration my sauce with each piece of gnocchi, and I'm not a fan of having to ration. As a rule gnocchi is pretty dry, it craves sauce to soak up and compliment it. Give me more sauce than I need, rather than less. It wasn't like it was truffle or something else scarily expensive, it was a tomato sauce, plain and simple. But, on balance, it was a satisfactory starter.

Our steaks arrived and they were all well overcooked. My steak was bordering on medium-well done, as was the other medium-rare steak. The medium steak was well-done. Not a spot of red to been seen on any of our steaks. That was a shame, as the flavour of the steak was otherwise very nice.

The waitress came over (as she did during our entree course) to ask how our main meals were. I commented that our steaks were all well overcooked. In response, she looked distinctly uncomfortable and said she was sorry to hear that and retreated rapidly from our table. I thought this was a strange reaction. Why bother to ask how our meals are if you don't intend to do anything if we say we're not happy? Either don't ask, or, if you do ask and something's wrong, offer a remedy.

I do understand if one steak happens to be overcooked. These things happen. But to have all three of us unhappy with how our steaks were cooked was pretty poor I felt.

On to dessert. We all decided that we would like to try dessert on top of our set menu selection. And I'm glad we did. Dessert was the highlight of the meal for me. I ordered a white chocolate and raspberry creme brulee and it was fantastic. A thick layer of brulee that cracked satisfyingly when I whacked my spoon on it. Underneath was a delicious custard laced with raspberries. I am a very harsh critic when it comes to creme brulee - the best I have ever had was in a restaurant in Paris. Every one I have eaten since, I have compared to Paris. Everyone who has been to Paris knows that anything struggles when compared to Paris!

Anyway, I would be happy to eat this creme brulee any time, any where. It was sensational. My friends ordered a chocolate tart, and an orange cheesecake. Both reported these dishes were also delicious.

Overall, I gave Caucus a 6.5 out of 10. The food was ok, but the steak was a real let down. It was overcooked, and the menu didn't represent what was actually served up on my plate. Dessert made up for things though. Following a straw poll, my friends both gave a 7 out of 10. In the spirit of the recently ended Olympics, I'll remove the top and bottom scores, leaving a solid 7 out of 10. On balance, I think this score is a little generous, but that's what we went with, so that's what will have to stand.

I'm report on some more WOAP dinners in the next little while.