My work colleague Morag recently completed an ironman. For those who don't know, an ironman can only be described as madness. A 3.8km swim, followed by a 180km bike ride, finished off with a 42.2km rum. Yes, that's a FULL marathon to finish! I cannot even imagine beginning to think about doing an ironman, let alone having the discipline to put in the hours and hours of necessary training (how would I fit in my cooking!). Anyway, Morag does have the necessary discipline and dedication and completed her ironman well under her goal time. What an amazing achievement.

To help her celebrate, and replenish some of those calories burned during her race, I made what can only be described as probably the best chocolate cake ever. I'm not exaggerating - pure, indulgent, chocolatey goodness. 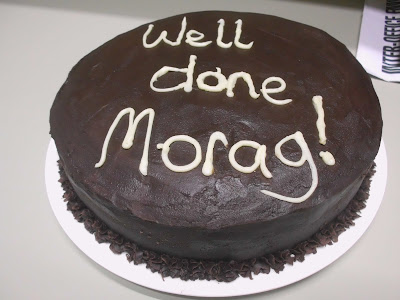 How does this sound - gorgeous, silky baked chocolate cheesecake sandwiched between two layers of dense flourless chocolate cake, smothered in a sour cream chocolate ganache and topped with a layer of chocolate buttercream icing.

I took Morag's cake to work to celebrate, and we made short work of hacking in and devouring it. To be frank, it was delicious. 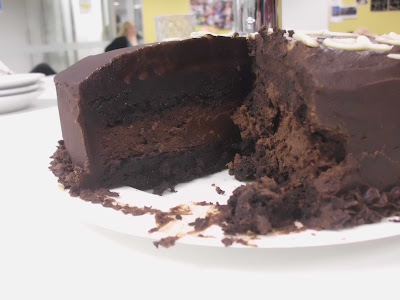 It was so rich, you can only eat the smallest piece. So, this cake goes a long way!

To be fair, I nicked the idea of cake, cheesecake, cake from another blog. But, as always, I adapted it to suit me, and added some delicious, decadent extras.

The cake recipe is here

I'll post it below too, as I have weighed everything out and the recipe is a little confusing.

Preheat oven to 150 degrees C. Grease a 20cm round cake pan, and dust with cocoa powder.
In the top of a double boiler over lightly simmering water, melt chocolate and butter. Remove from heat, and stir in sugar, cocoa powder, eggs, and vanilla. Pour into prepared pan.
Bake in preheated oven for 30 minutes. Let cool in pan for 10 minutes, then turn out onto a wire rack and cool completely. Slices can also be reheated for 20 to 30 seconds in the microwave before serving.

The baked cheesecake is below.

Preheat oven to 160 degrees C. Place a large roasting pan on the lower third rack of the oven and boil the jug.
Spray a 23cm springform pan with nonstick spray and line the bottom with a round of parchment paper. Wrap a double layer of foil around the bottom and up the sides of the pan (you want to seal it so the water from the water bath doesn't seep into the pan). In the top of a double boiler over lightly simmering water, melt chocolate. Set the chocolate aside and let it cool off until it is lukewarm but still pourable.
In a large bowl, use an electric mixer to mix the cream cheese- blend until it is nice and smooth and creamy. Mix in sugar and cocoa powder and blend until incorporated, scraping down sides of the bowl as needed. Add eggs, one at a time, blending after each addition. Mix in the lukewarm chocolate. Mix until smooth. The batter will be very thick- scrape it into the prepared pan and smooth the top.
Set the pan into the roasting pan in the pre-heated oven. Carefully pour the hot water from your kettle into the roasting pan (it will fill the pan surrounding the cheesecake). Pour enough water so that there is about 2cm of water coming up the foil along the sides of the cheesecake pan. Bake the cheesecake for 45 minutes. It should be set to the touch and not jiggly. Remove the cheesecake from the roasting pan and let it cool on a wire rack for at least an hour.
This can be stored in the fridge for several days.


Following the success of Morag's cake, when I was asked to make a cake for my partner's Mum's 60th, I knew exactly what to make. 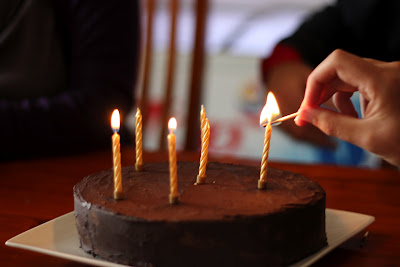 This cake went down just as well as the first. 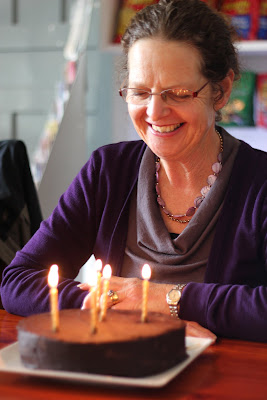 I totally recommend you try this cake! 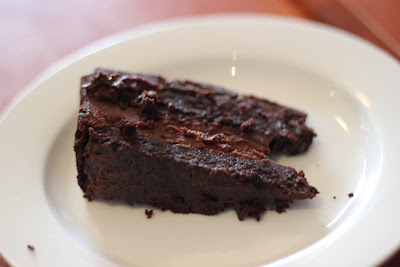